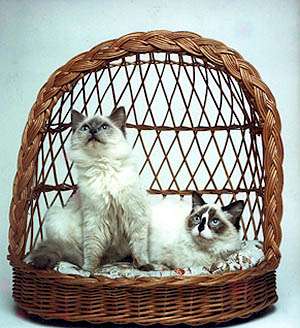 Barfield and Blossom of Patriarca first Ragdolls in France 1986.

Blossom with the first litter of Ragdolls born in France. 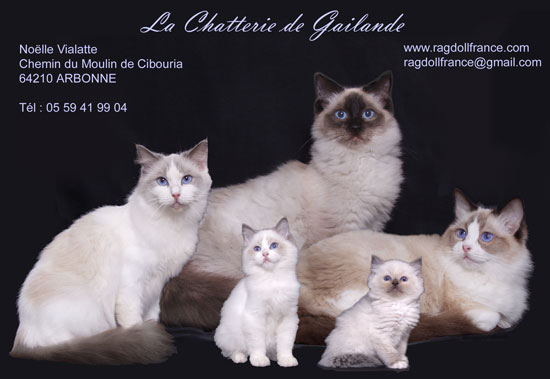 In 1986 Noëlle Vialatte (The Gailande Cattery) was the first to import and to breed the Ragdolls in France. Noëlle holds a unique place in the world of the Ragdoll, accumulating the first births of Ragdoll in France, the first "Bests generals", the creation of the first Club Ragdoll, the first exhibitions "Special Ragdoll", and the first site dedicated to the Ragdoll in 1996.

The Gailande Cattery have not only old English lines, renowned for their type and superb eye colour, but also traditional American lines, known for their size and charming character. From this synthesis are born the kittens well known throughout Europe for their outstanding beauty and temperament.

The Gailande Cattery is situated in the beautiful Basque country only a few miles from the popular seaside resort of Biarritz. There is an International airport close by and also the High Speed Train station at Biarritz "La Negresse" offering direct connections to Paris.

Barfield and Blossom of Patriarca first Ragdolls in France 1986.

Blossom with the first litter of Ragdolls born in France.