The principal characteristic of the Ragdoll and that which differentiates it from other breeds of cats is its wonderfully stable character and gentle personality.

The origin of the name Ragdoll is due to the cats ability to relax completely in ones arms, irresistibly reminding one of the toy of the same name. However, the Ragdoll remains a feline and like any other breed must be treated with the respect due to any member of the animal kingdom. This laid back attitude can be present to a smaller greater degree, depending upon the lines from which the cat comes from, and equally important, the manner in which the kitten has been raised. Young kittens should be lovingly handled from a very early age so as to be in total confidence with their human friends.En anglais, Ragdoll signifie textuellement poupée de chiffon, dont l'origine est due à une étonnante particularité: lorsqu'on le tient dans les bras, le Ragdoll se relaxe complètement, devenant mou comme un paquet de chiffon. 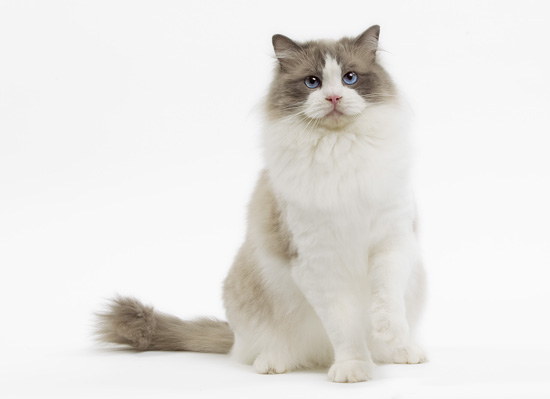 The most unique pattern has to be the bicolour as no other breed has the colourpointed patterning overlaid with white, due to a white spotting gene. The aesthetic appeal of a well marked Bicolour is akin to a work of art, as the sheer beauty of their appearance is striking.

Reflectively pensive in temperament the Bicolour male masquerades as a lion; whilst the female is ebullient and poised. Their magical expression is highlighted bt a distinctive symmetrical inverted white "v" on the mask, starting on the forehead, extending downwards covering the nose, whisker pads and chin, complimenting the large brilliant blue eyes.

In the mature cat, the head is framed with a profuse neck ruff. The bib, chest and entire under-body should be white, as should the front and back legs. The semi longhaired silky textured overcoat, whilst gradually shading to tone with the body colour, may have evenly distributed patches of white on the back which may vary in size, but should not extend beyond one third of the total back area. the dense points of the ears, remainder of the mask and long, plumed tail complete the overall image. The nose leather and paw pads should be pink. 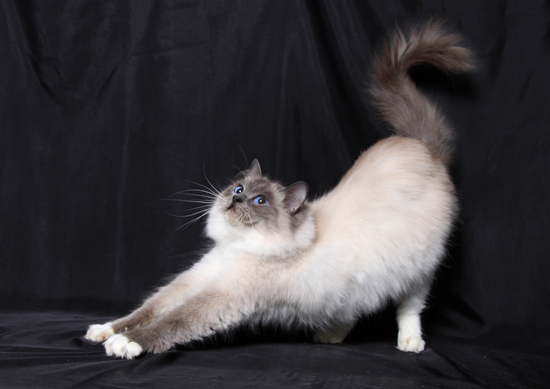 What a dapper chap the Mitted Ragdoll really is as he strides out in his pristine white boots. With all the attributes of the colourpointed, yet further enhanced by a sparkling white chin, chest and under-body, the mitted Ragdoll is thought of as the original Ragdoll look.

The male is the epitome of a gentle giant, reflecting his easy going, relaxed personality; whilst in contrast the female has an irresistible charisma and is graciously spirited. Their luxurious silky textured semi-longhaired overcoat, whilst shading on the back to tone with the body colour, is trimmed with a paler neck ruff. Such appealingly attractive brilliant blue eyes perfectly highlight the dense points of the mask, ears and tail.

The Mitted Ragdoll has been the most controversial of the patterns because of its reputed similarity to the Birman. Undoubtedly confusion has arisen because people are drawn to the eye catching white mittens and boots. however, here the similarity ends, as both in type and appearance the Mitted Ragdoll differs quite considerably and has several very distinctive features; the most obvious being the dominant white chin, chest and entire under-body. Another distinguishing feature, though not common to all Mitteds, is an attractive white blaze on the nose.

Mitted kittens are especially adorable with their little white mittens and boots portraying an enchanting picture. Like their Colourpointed counterparts, the Mitted kittens' points develop slowly from the central area outwards. However, in all the colours from two weeks of age the white mitts and back boots is most apparent. Breeders should be able to identify the clean white chin diffusing into the chest from 6 weeks of age. As a guide, the demarcation lines of the white patterning is stable throughout life. 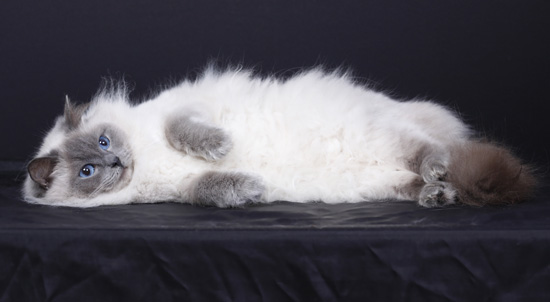 Of all the patterns, it is the Colourpointed Ragdoll that remains eternally popular and understandably so. The male Colourpoinred Ragdoll has the powerful look of a lion, but the disposition of a lamb; whilst the female is understatedly elegant and vivacious. Visually the striking combination of their silky overcoats, shading to a rich tone, are highlighted with contrasting neck ruffs, fusing down into the chest and undercarriage. Bold, expressive blue eyes, dramatically emphasised by a dense mask and ears, matching velvet boots and long feathered plumes, perfectly reflect their wonderfully easygoing temperament.

*From "The Definitive Guide to Ragdolls".